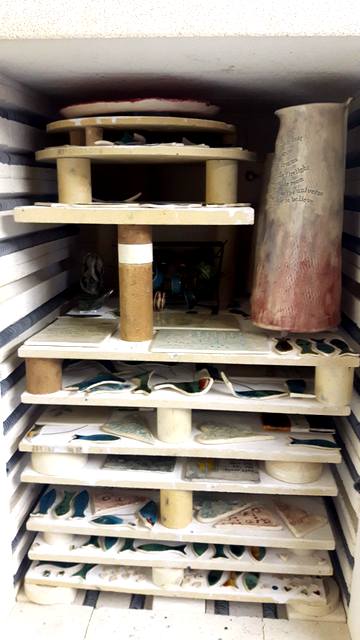 I’m not sure if that expression came from the Great Pottery Throwdown or if it’s been in existence for as long as kilns have, but many of us can be found uttering the words…
There was meant to be a series of photos taken as the kiln was emptied the other day, but I have to be honest, I was distracted by the arrival of the local fish van. We’re veggie but he sells also a great range of fresh fruit and veg, butter and cheese so we meet him at our gate every Thursday when he beeps his horn. Anyway, while I shopped, Chris kept emptying and I forgot to give him the camera.
There are at least two firings for each piece. In the first firing, a bisc, or bisque firing, everything gets piled in and stacked high but in the second firing, it has to be placed much more carefully. Nothing can touch each other, or it will fuse. Anything with glaze on or near the bottom has to be balanced on wee stilts. And everything has to be at least a centimetre from the sides or from the shelves placed above. This is called a ‘glaze firing’, the second and final one for us. Some people do extra firings, for transfers for example, but I stock with two for now anyway. Sometimes a piece isn’t quite right and I might add some more glaze and re-fire it but usually two is enough.
Karen says stacking the kiln is like a 3D game of Tetris. I love it. We often get left with one piece in our hands that doesn’t look like it will fit and that means it’s time to start swapping pieces round and creating small spaces for smaller shelves. I like to rise to that challenge. It will all fit… Usually. You will find me at this stage staring and sighing and shifting things round, determined..
As well as our own pieces, and Karen’s, we fire workshop pots and other potters’ work too. We aim to fill the kiln before firing but sometimes we need to put it on earlier before if someone has a tight schedule for an order or birthday gift. It takes quite a long time with the care that has to be taken for each piece. But the joy of emptying the kiln on a glaze day is great – well, usually. Sometimes there’s a disaster. Least said about that, the better! 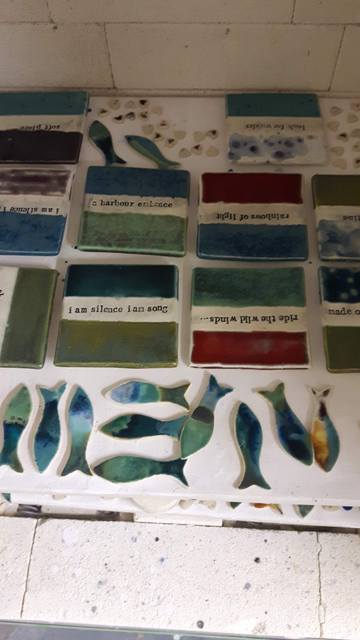 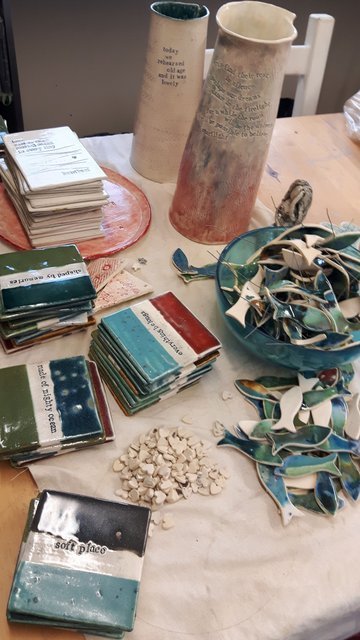 We are just loving the winter sunrises. It's a bea

Words to warm your heart towards winter.. Chris us

It's out there! We've still got more to go but a h

A weekend full of all of these things. Thank you s

A beautiful venue. Come to Briggait today if you c

A blurry snap to match our bleary eyes, on the fir

Chris's words are the only ones used on our potter