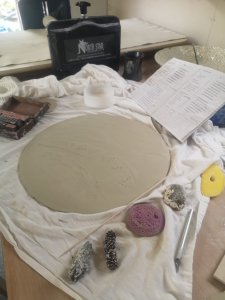 This is my third attempt at a very large bowl. Once I finished putting the lettering and the textures and lines in, it went into a large mould and is drying nicely. The rocks and pine cone created textures for the bowl. I’ll be posting pictures once it’s finished.

It’s my third attempt because the first two went badly wrong. I made a large bowl with a thin slab of clay and it dried and fired beautifully but warped in the glaze firing.

After sulking for a while, I made some trials with smaller bowls, which also sometimes warp, by using thicker slabs of clay. I don’t enjoy it as much but at least there are less ‘seconds’.

So, time to try the large bowl again, this time with thicker clay and a lovely ring base..

And still it slumped! No longer a bowl, more of a wobbly platter! I asked a fellow potter for advice and she suggested less glaze on the edges and then firing the bowl upside down.. So, that’s what I’m going to try! Wish me luck. You know how sometimes you don’t necessarily remember the detail of a place, just the feeling, the shape, the light..? That’s what I hope to capture in the pottery – this plate is of Toward, a bay near us. I doubt that anyone local would actually recognise it, but it resembles the way it makes me feel – held by the hills that swoop round and the water as the tides change. I love the light there, even as dusk approaches, the light lingers.

Where is your special place? We can capture it in clay for you.. 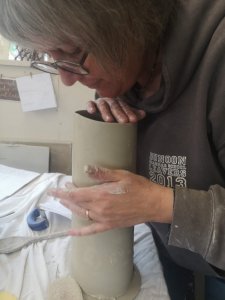 What do you see?

My concentration face and the wrong pair of glasses.

My rings which I never remove for fear of losing them somewhere.

A sketch in the background for a new commission.

Useful tools – a mini grater for cutting angled edges, a wooden spoon for securing joins, a kidney for smoothing and a sponge for smoothing too.

And me, not using any of them, just my hands, as usual..