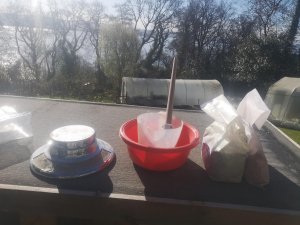 Last week the sun shone which meant it was much easier to get the dusty and unhealthy jobs done outside, including making up new glazes. We order a large batch of glazes every now and then and always try one new one. Sometimes it works and fits in well, often it doesn’t! There are a number of ways to make a glaze – sometimes with all the chemicals and oxides carefully weighed and measured, following a tried and tested recipe (the cheapest but most time-consuming way), sometimes a shop-bought glaze in a pot, ready mixed (the most expensive way), or the middle ground – to buy a powdered version of the glaze you like and weigh and measure it out, making using a sieve, with glaze medium. That’s what’s happening here. It take s awhile and makes a mess but I do love doing it. It’s very satisfying! Watch this space for the finished result.

James and Emily will be at our Makers Dozen market

Don't you just love the internet? We met Karl thro

What a view from our community post office! Our we

Next week is the launch of the Pretty in Print exh

We're going to Potfest! We were delighted last wee

James' sister Rhona was on TV last week on 'Take a

We had fun recently doing a workshop for eight pal

Behind the scenes at seatree hq. This is the spot